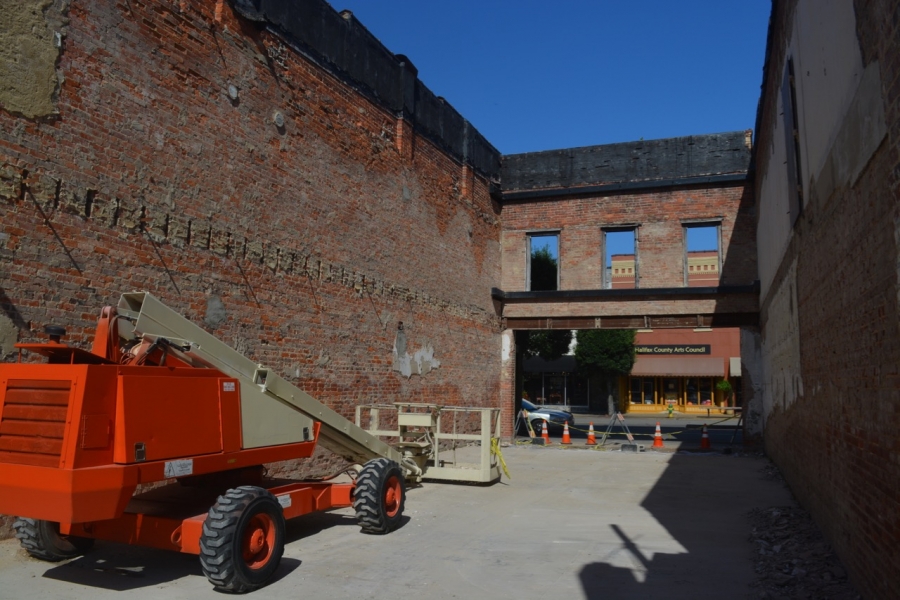 Murals to be placed at the urban green space at 1026 Roanoke Avenue will pay tribute to the city’s rail, river and textile history.

The murals are the works of local artist Napoleon Hill and feature the depot near Roanoke Avenue and Julian R. Allsbrook Highway; the Roanoke Canal Museum, formerly a power station and the Rosemary Mill before much of it was demolished.

The Halifax County Arts Council funded the commission of the mural through a Grassroots Art Program grant.

The location of the green space was home to the former Roanoke Restaurant. “This was a major safety concern,” Caudle said at the meeting.

The facade of the building was saved and work on improvements is underway. It will eventually have tables and chairs and a water feature, Caudle said. The tables and chairs will be in a  courtyard-style and it will have seat walls coinciding with the landscaping retention.

The aim of the Phase 1 improvements is to make the space compliant with the Americans with Disabilities Act, making the slope at the front entrance of the space wheelchair accessible, city Planning and Development Director Kelly Lasky said last week.

There will also be minor improvements to the municipal parking lot behind the space, which is also for ADA compliance.

Inside the space, the city’s public works department has stripped away most of the sheetrock on one side to expose the brickwork and removed nails from the outer walls.

“We can’t wait,” Caudle said last week. “The demolition was two summers ago.”

In addition to ADA compliance, Caudle said the space will be well-lit.

It isn’t clear when the prep work will be completed. “When Phase 1 is completed, I’m sure Main Street will celebrate.”

Both Caudle and Lasky praised the public works department for the prep work on the site. “This would not be possible without the city’s support and without state funding which Representative Michael Wray got for us,” Caudle said.

Caudle is hopeful the space, once completed and furnished, will draw more people to the avenue. “I think it could be a catalyst, giving the public an outdoor space in one of the most visited  blocks of the avenue.”

Caudle told those gathered at the Main Street meeting, “We feel like it will be a tremendous asset for everyone.”