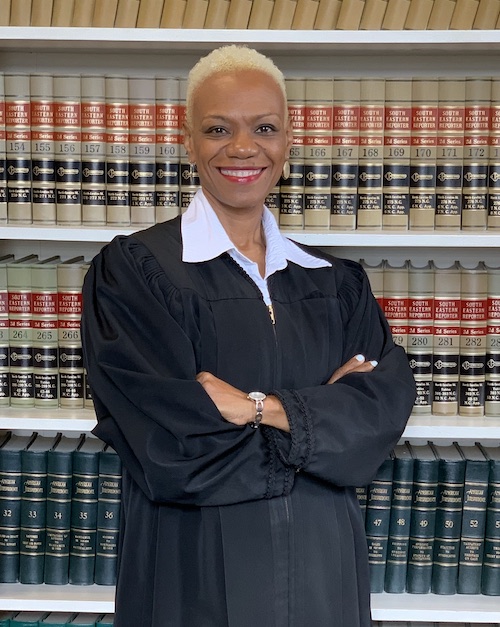 A voice of reason, sound judgement and common sense — That’s the mantra that Judge Moody has used since her election to the bench in 2012.

Judge Moody was elected as the first woman to serve on the bench in District 6B — formerly Bertie, Hertford and Northampton counties.

Two years later, the district merged with Halifax County where she had previously served as an assistant district attorney for a number of years.

She has served as a district court judge in District 6 for the past seven years. “I’m a homegrown judge. I grew up in the district in Bertie County and I’ve lived in the Roanoke Valley area in Gaston for over 20 years. I know the people and I have a vested interest in the communities here because my family is here.”

Judge Moody also points out she is the most experienced candidate in this race.

In addition to having practiced law in various capacities, she has the experience of presiding over every type of case that a district court judge can hear.

Beyond that, Judge Moody says the real personal experience that comes with having been a wife and a mother who has raised two children to adulthood makes her better prepared for cases. “The highs and lows and joys and challenges of marriage, divorce and parenting are issues that I deal with each week in family law cases — separation, divorce, child custody, domestic and juvenile cases.”

She feels that this breadth of experience serves the citizens of the district well as she has a broader and better perspective when dealing with cases that often change people’s lives. Always striving to be firm but fair, Judge Moody has no problem “telling it like it is” in court and says that her goal is to always instruct, inspire and incentivize our citizens to strive harder and to do better.

Vershenia Ballance Moody was born January 11, 1970, and was raised in Aulander.

She attended Bertie County public schools and graduated from Bertie High School in 1988.  She attended and graduated with honors from the University of North Carolina at Chapel Hill with a Bachelor’s Degree in Political Science and a Minor in African American Studies.

She then obtained the Degree of Juris Doctor from North Carolina Central University School of Law where she also graduated with honors.

After graduating from law school, Judge Moody moved to New York where was admitted to the New York State Bar and worked for the law firm of Skadden, Arps, Slate, Meagher & Flom. There her practice area was in the Antitrust and Federal Trade group.

In June 2005 she engaged in the private practice of law with a local firm.

It is in that capacity that she learned what it feels like to sit on the other side of the courtroom.  From 2009 through December 2012 she served as an assistant district attorney in her neighboring District 6A in Halifax County.

When she was elected to the bench in November 2012 she became the first woman to serve as a judge in District 6B.

In 2015 Districts 6A and 6B combined and now Judge Moody serves the citizens of the  four-county District 6 comprised of Bertie, Halifax, Hertford and Northampton counties.

For most of her career Judge Moody has served the public, protecting the rights of victims of crime in District 6A and 6B.  But even as an attorney in the private sector, she worked to protect the rights of those accused to ensure that they received proper legal representation and due process under the law.

She believes that working in these various capacities has made her a better and well-rounded judge.

Judge Moody lives in Gaston and has two children — Marvin “MJ” Jr., 21, and Mackenzie, 18. Her parents, William "Bill" and Beulah Ballance still live in the home where she grew up in Aulander.

She has one sister, Nicole Ballance, of Chesapeake, Virginia.

Over the years Judge Moody has been a member of various organizations and she has been an involved member of her community at large.

She has served as a guest speaker at various youth programs, churches and community programs in the district and she regularly volunteers at local schools to motivate young people and encourage them to reach their dreams.

She is also a member of  Delta Sigma Theta Sorority, Inc.

Judge Moody is committed to her district, its businesses and its citizens.

She is experienced, fair and dedicated to justice and wants to make a difference in the lives of all whom she touches.

She often says, “Knowing the law is not enough. It is that coupled with the fair and practical application of the law to real life circumstances which makes the ultimate difference in people’s lives.”