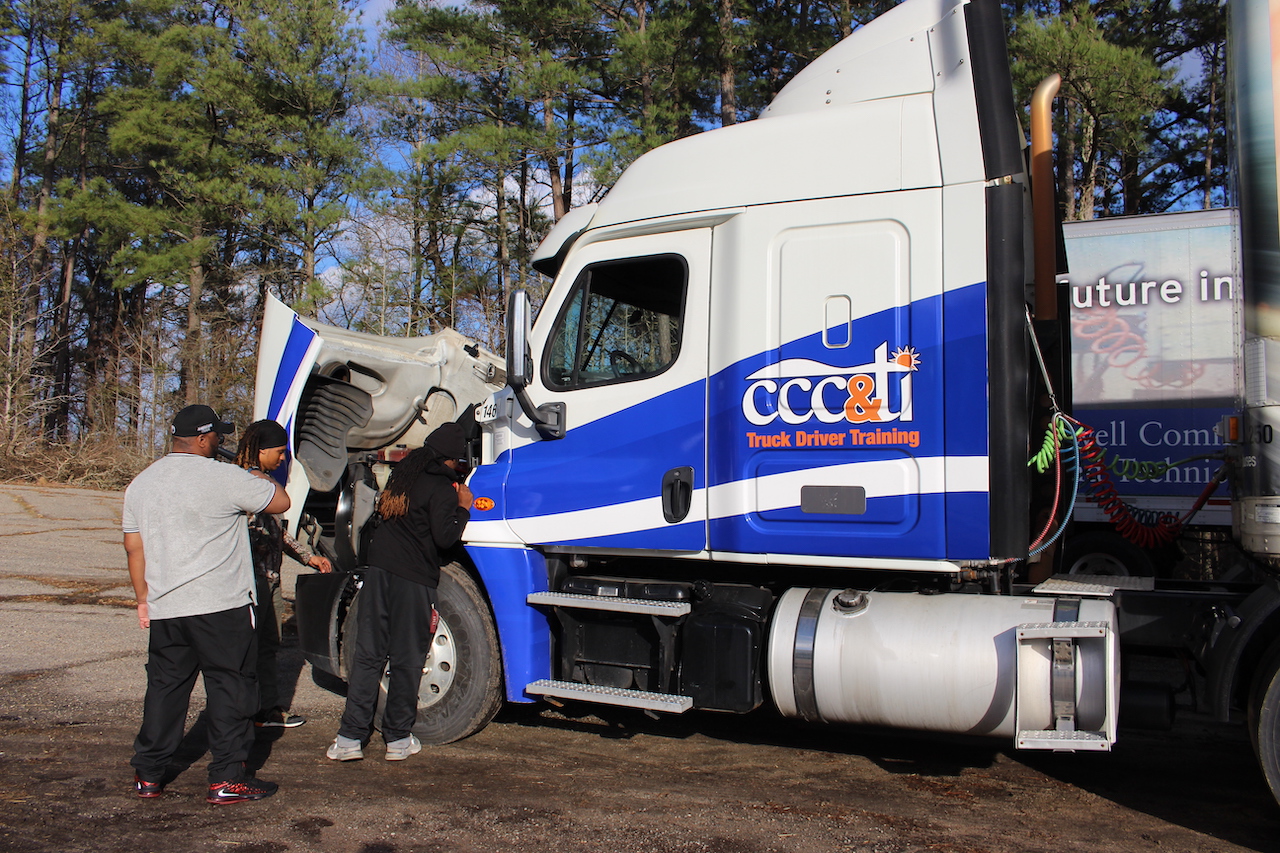 Weldon resident Kelvin Knight initially doubted he could do it.

The former plumbing technician had occasionally driven his dad’s dump truck in his younger days but he wanted a bigger challenge, something that would provide for his family.

Thanks to a referral from the state’s NC Works program that brought him to Halifax Community College, after nine weeks of intense training, he’s credentialed to legally drive big rigs and get paid for doing it.

In a joint effort of HCC’s workforce and economic development division and Caldwell Community College and Technical Institute’s truck driver training program, Knight is one of 10 who received commercial driver’s license certification in early March.

Knight immediately landed a job, one that even provided him additional training, for Ezzell Trucking Inc., a Harrells company that specializes in transporting wood residuals.

Knight sees the real possibility of someday working as an owner-operator.

“I finally finished something,” he said. “I’m so proud of myself.”

In less than a month, he and his classmates found their lives transformed from the experience.

The full-time student cohort performed classroom work, range driving and road driving in the Roanoke Valley but performed their CDL road test in the mountains.

Hudson-based CCC&TI facilitated the driving portion and provided the trucks. Serving Caldwell and Watauga counties, its truck driving training curriculum has operated since 1990.

Knight admitted he was thrown a bit, just before he took his driving test, when faced with the landscape change but said the new conditions sharpened his focus and made him a better driver. “I learned I couldn’t roll back on the hills,” he said. “I had to really concentrate on the conditions before me.”

Unlike some trucking programs, CCC&TI teaches students to drive manual and standard transmissions. Many of the students had to learn to drive a stick-shift truck, a skill new to most in the class, on Day One.

Jalen Owens, of Roanoke Rapids, was not familiar with driving a manual but the task didn’t deter him from the CDL opportunity.

“I recognized this extra skill would help me in the long run,” he said.

“I’m not confined to only driving trucks with automatic transmissions,” he added. “My choices are practically limitless.”

When Ezzell Trucking’s Human Resources Manager Laura Deans learned about HCC and CCC&TI’s joint CDL program, she visited the class during its orientation day to encourage their success and share that her company was excited for their futures.

“With your CDL certification, you’ll never be without a job and you’ll always have work,” she told them. “You’ll truly be in the driver’s seat and can choose your own destiny.”

Chuckling at the idea that he works with dog food, he regularly hauls a refrigerated truck for Purina. He pulls a dedicated load around Atlanta and noted his truck’s GPS alerts him where he’ll go.

“If my wheels ain’t turnin’, I ain’t earnin’,” he said. “My HCC class enriched my life and it’s a great opportunity for other Roanoke Valley people.”

Nikiesha Fields, one of two women in the class, will soon work for another refrigeration carrier, Frozen Food Express, out of its Rocky Mount location.

Fields took HCC’s CDL class in tandem with her studies at NC Wesleyan College where she’ll graduate with a B.A. in Business Administration in early May.

She noted her brother has been in the trucking industry for more than 25 years and that she likes both the schedule she’ll have and the pay she’ll get.

She admitted feeling intimidated the first week of class but that she never felt out of place, only part of a close-knit family who wanted a better future.

“I feel like I have wings,” she said of her accomplishments.

Jamari Baker has really hit the road after acquiring his CDL.

Following his family members who drive trucks, he’s working in the metro D.C. area, some days pulling trailers of substation construction equipment to and from the heart of Washington and other days driving dump trucks with loads of dirt.

Baker said he’s grateful for the range of driving he received in class, that it helped him prepare for the variety of conditions he has experienced in his new urban setting, notably the shifting traffic patterns, the constant traffic jams, the quick stop lights, the volume of pedestrians and working with his fellow truckers.

“Having my CDL has helped me level up in life,” he said. “The class taught me there are multiple ways to learn and problem solve to do a job successfully.”

Belinda Jones-Hill, mother to Brandon Thornton, another student of HCC and CCC&TI’s joint effort who’s also employed by Ezzell Trucking, is thrilled that her son earned his CDL.

She noted that for the first time in his adult life, her son is following a career path that offers him and his family security. She added that early in the program he stressed a bit about identifying parts of the truck’s engine but the camaraderie of the class inspired him to study and master the content.

“With the support of his family and classmates, Brandon stayed focused and on task, with everything coming together for him,” said Jones-Hill. “This nine-week investment provided him an opportunity to make a good living. I hope others can benefit from this training.”

Joyce Buffaloe, HCC Trustee and Northampton County commissioner, is another CDL graduate mom who’s an advocate for the community colleges’ joint training program and hopes to see it duplicated. Like many in the inaugural class, Jay Ford also joined Ezzell Trucking and is poised to hit the road hauling wood chips, pellets, bark and shavings.

“I’m very thankful that HCC offered this course with CCC&TI because there’s such a need both regionally and nationally,” said Buffaloe. “I encourage any of our citizens who are interested in obtaining their CDL to contact HCC about it. Enrolling in the next CDL class can change lives.”

The success of the CDL joint training program clearly illustrates the concept of community education. Partnerships between HCC and CCC&TI, even Halifax County Schools which provided its administration headquarters’ backlot for the outdoor classroom and proving grounds, showed that creativity, grit and perseverance can boost outcomes and inspire replication.

“Community colleges are not only economic drivers in a community but they also are institutions that can change people’s lives quickly,” said HCC Acting President and VP of Administrative Services/CFO David Forester. “The CDL program serves as a great reminder of the dramatic benefits of short-term training improving the lives of students.”

“Lifelong learning is proven to be a launch pad for long-term success and HCC is a quality choice for career achievement in our area and beyond,” said Fey. “The success of the CDL program proves education boosts growth and outcomes.”

He noted the diverse group, who ranged in ages from 21-50, supported each other throughout their training and skills development.

“These accomplished men and women are definitely on their way to well-paying careers in the trucking industry,” said Cockerham. “I’m confident their nine weeks of training served as a slingshot to a lifetime of success.”