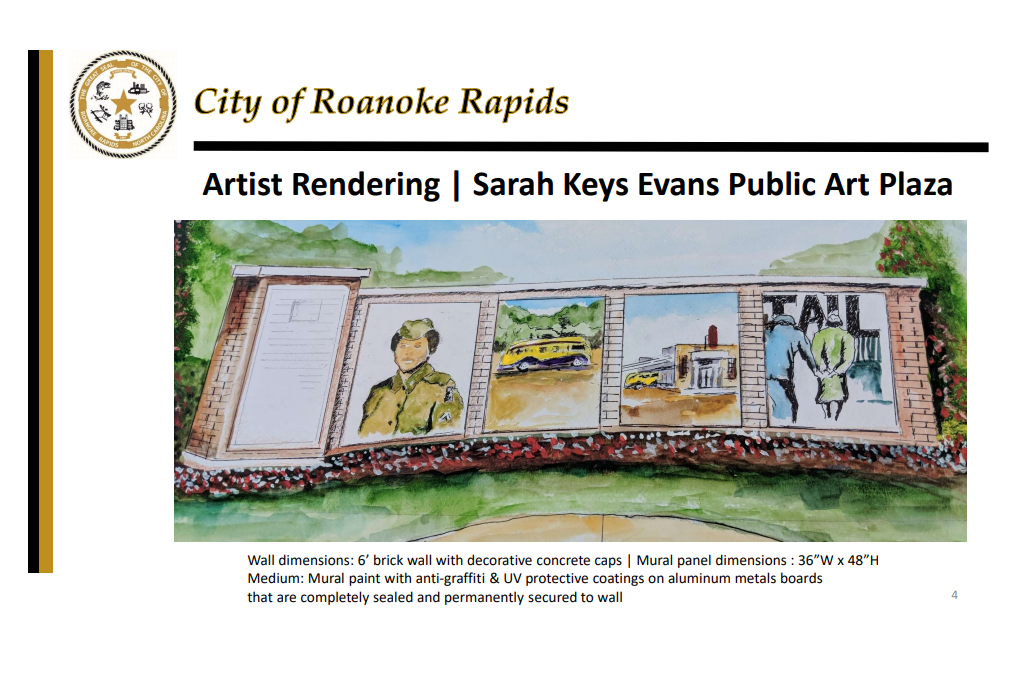 The project is a semifinalist for a Z. Smith Reynolds Inclusive Public Art Grant Initiative.

“I am elated,” said Reverend Charles McCollum after council approved the site location. “To see the community come together without discord adds substance.”

McCollum spoke during the public comments section of the meeting, commending council for backing the project honoring Keys, whose complaint to the Interstate Commerce Commission in the 1950s led to desegregation of bus lines traveling across state borders.

The basis of that complaint occurred when Keys — now Sarah Keys Evans —  a private in the Women’s Army Corps, departed her WAC post in Fort Dix, New Jersey, on the evening of July 31, 1952, for a furlough to her hometown of Washington, North Carolina.

She boarded an integrated bus in New Jersey and transferred without trouble in Washington, D.C, to a Carolina Trailways bus.

She took the fifth seat from the front in the white section. When her bus pulled into the Roanoke Rapids Trailways terminal, however, a new driver took the wheel and demanded that she comply with the carrier's Jim Crow regulation by moving to what was then called the colored section in the back of the bus so that a white Marine could occupy her seat.

Keys refused to move, the driver emptied the bus and directed the other passengers to another vehicle. He barred Keys from boarding it.

The case, Sarah Keys v. Carolina Coach Company, which was ruled upon in 1955, is considered a landmark civil rights case in the United States and banned segregation of black passengers in buses traveling across state lines.

The ICC ruling predated the Rosa Parks case by a week.

“Rosa Parks got all the glory,” McCollum said. “This woman (Keys) was the unsung hero whose time has come. To think she is still living, she’s never been back to Roanoke Rapids. This might bring her back to celebrate what she accomplished. Rosa Parks benefitted from that. All others benefitted from that. It could be significant in terms of history. We’ll end up in prominence for what happened.”

Roanoke Rapids Main Street Development Director Christina Caudle told council the public art project will be in the form of a visual timeline with murals from artist Napoleon Hill.

Parks and Recreation Director John Simeon said the art plaza would face Virginia Avenue and be located next to Wyche Street.

With a Highway 158 Master Plan already in place, Simeon said, “Staff feels (the project) fits right in with this concept.”