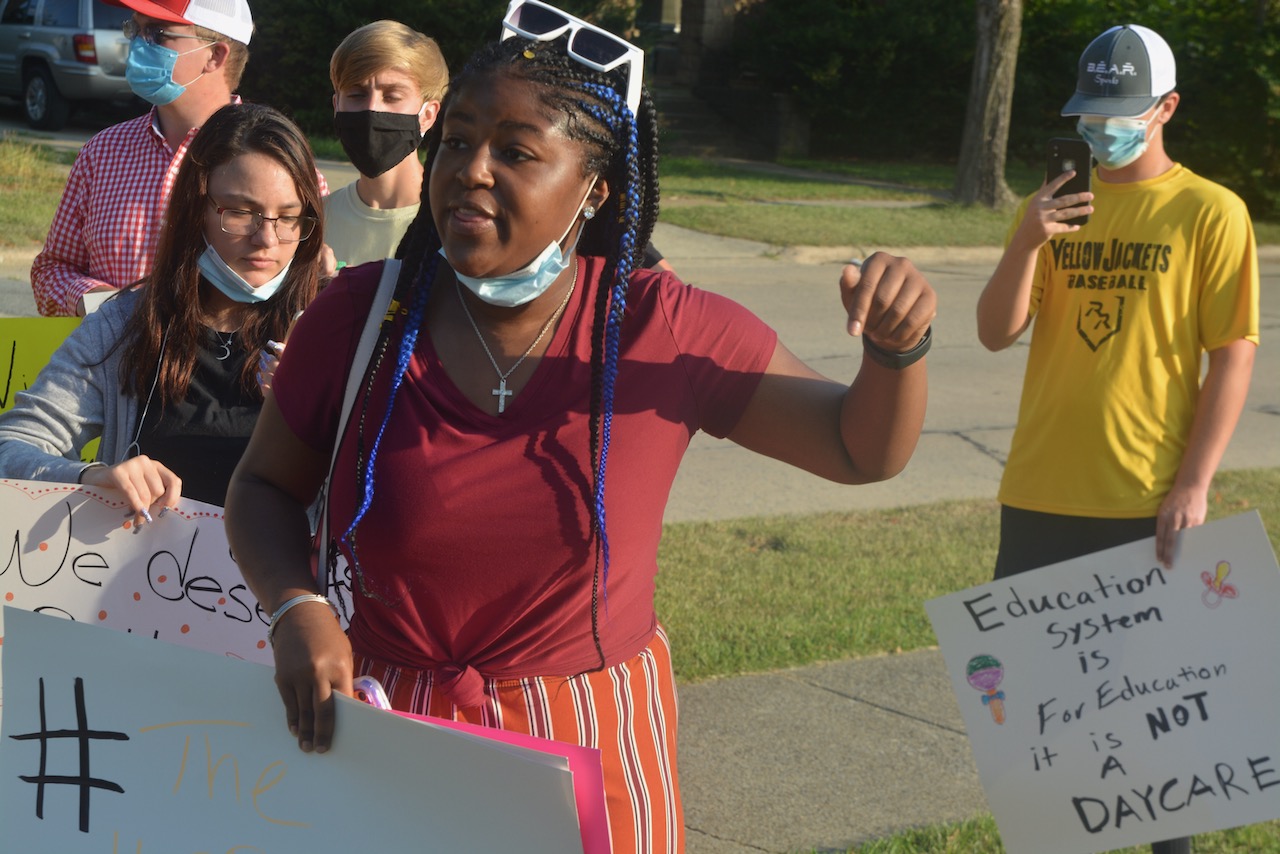 Some of the complaints have already been registered, city school officials said.

This morning they were aired again in front of the Roanoke Rapids Graded School District central office on Hamilton Street by a group who marched from T.J. Davis Recreation Center.

Many held signs protesting a decision by the school board Tuesday which will keep high school and early college students off campus and in a virtual learning environment due to COVID-19.

As they marched they chanted, “We are your customers. We deserve better,” a spin on the school system’s slogan Kids are Our Customers.

The points they made, school system spokesperson Les Atkins said, were “very valid and we’ve heard a lot of those points already from students.”

The system has heard from students who are now the breadwinners because of lay-offs due to the pandemic.

Atkins said as he and other school administrators listened to the concerns over Tuesday’s 6-3 decision on the system’s reopening plan, meetings were held Wednesday and scheduled today to come up with solutions. “We heard the concerns and are committed to working towards an equitable solution that meets the needs of all of our students. We’re meeting with faith-based leaders right now to look at church buildings. We’re going to meet with the city to look at available buildings that the city is not using and talking with DPI (the state Department of Public Instruction) to see if we’re able to use those buildings, to see if they’re set up for a safe school.”

There are safety concerns and funding concerns he said. “We also have to look at funding because the district doesn’t have an endless pot of money. When we start talking about equitable solutions if we bring students to school we’re going to have to have 12 kids on a bus so imagine how many bus routes we have to run in the city to get 12 kids to school — 3,000 kids roughly and 12 at a time.”

Atkins said Tuesday’s decision was based on Governor Roy Cooper’s Plan B “because younger children are not as susceptible to transmit. That was one of the things that steered us in that direction.”

It’s also important, he said, to fill out an intent form and survey so administrators can gage how many pre-K through eighth parents want their children at school or in the same virtual learning environment the high school students are expected to work under.

But the concern this morning of those who marched was of the high schoolers.

“It sounds like to me you’re talking about what they’re doing in Raleigh,” said Jason Etheridge, who has three children in high school. “We’re talking about if (Superintendent) Dain Butler and his administration are not doing their jobs and offering more options on the table for our school board.”

Etheridge said, “You guys have not done your job. You work for the school board. The school board doesn’t work for you guys. There was only one option on the table. We needed more options and if you had provided that and the vote had gone through we probably would not have been standing in front of you today. I will be sure that those school board members are going to be removed and we’re going to work very hard if we don’t get what we want to make sure you are as well.”

Etheridge said the system has known about the novel coronavirus since March. “You’ve had all summer to prepare and you were only giving us one option.”

Etheridge brought his son, who has autism, with him. His son has been mainstreamed and isn’t in special curriculum. “This young man is not going to be able to learn virtually. I’m a 12-hour shift worker, my wife works eight or 10 hours a day and he will not succeed that way.”

He said his goal as a parent is to send “responsible, intelligent adults into a world where I think we’re not doing so well lately. I want them to have every advantage they can have. Virtual learning is not it.”

In summary, he said, “We at least want an A-B schedule where 50 percent of the kids go three days a week and 50 percent go two days a week. That way everybody goes to school.”

Two of the school board members who voted against the proposal Tuesday came to the rally.

School board member Henry Ford, who also voted against the measure with Liverman and Tammy Colston, said, “I’m not for any virtual learning. I understand the risk but like the scientists are showing there is a 99-98 percent recovery rate. Governor Cooper, last time I checked, was not a scientist nor a doctor. He may be going off his opinion or guidelines but he’s not a doctor so I don’t see how he can dictate what people do.”

Ford said he has observed firsthand a lack of social distancing. “I went to a party the other day that had 20 kids there at the pool. We’re going to Walmart, restaurants. I just don’t understand the point of going this direction.”

Ford’s plan would be to see one group to school one week and another group the next. “But my ultimate plan if I had to would be to go back 100 percent regularly starting the Tuesday after Labor Day. That would be my plan but if I have to go by some type of guideline I would do ‘A’ a week, ‘B’ a week; everybody stays in the same schools, nothing would change. All you’re doing is teaching half the population one week, half the population the next.”

Speaking during the rally, Michela Broadnax, who will be a senior this year, said, “We deserve a chance. One or two days is all we’re asking at least so I can see and get in front of my teachers and grasp that lesson in a way I can’t do it online.”

Broadnax said she was speaking on behalf of many of the students attending.”We don’t learn online that well. We deserve to sit in front of our teachers to get that lesson.”

She already understands there will be no prom and other events seniors look forward to. “At least from the kindness of your heart make a plan where we can attend Roanoke Rapids High School for a day or two. Somehow, you’ve got to find a way we can be in a classroom. I will do my best to work hard on my online class but I know I will succeed more so if I’m face to face.” Broadnax, who was junior class president, said afterward, the high school students deserve the same chance as the students up to eighth grade are getting — to be in classrooms. “I understand we are under very strict restrictions right now but we can make something happen where they can allow us to go to school for a day or two. That’s the bare minimum that we’re asking — to go to school for a day or two. If you don’t do that you have failed us.”

She said she would even opt for Zoom classes. “We could do Zoom meetings where we could meet with our teachers and see them face to face and be present in that class.”

This past school year was tough, she said, planning prom and other events. “Everybody was excited and it was just stripped away. We could all understand it was because of COVID and we had health restrictions which was understandable. It’s been a bummer, being stuck in the house and having to sit there. Sitting in a room all day and trying to work together and go to school it’s hard.”

School is an outlet for many students, she said. “They just went ahead and full force voted on something but didn’t get our opinion first. Listen to your people before you take any action. I’m very well aware I won’t have my prom, those gatherings, those little trips, but we deserve to be in a classroom as well as K-8.”