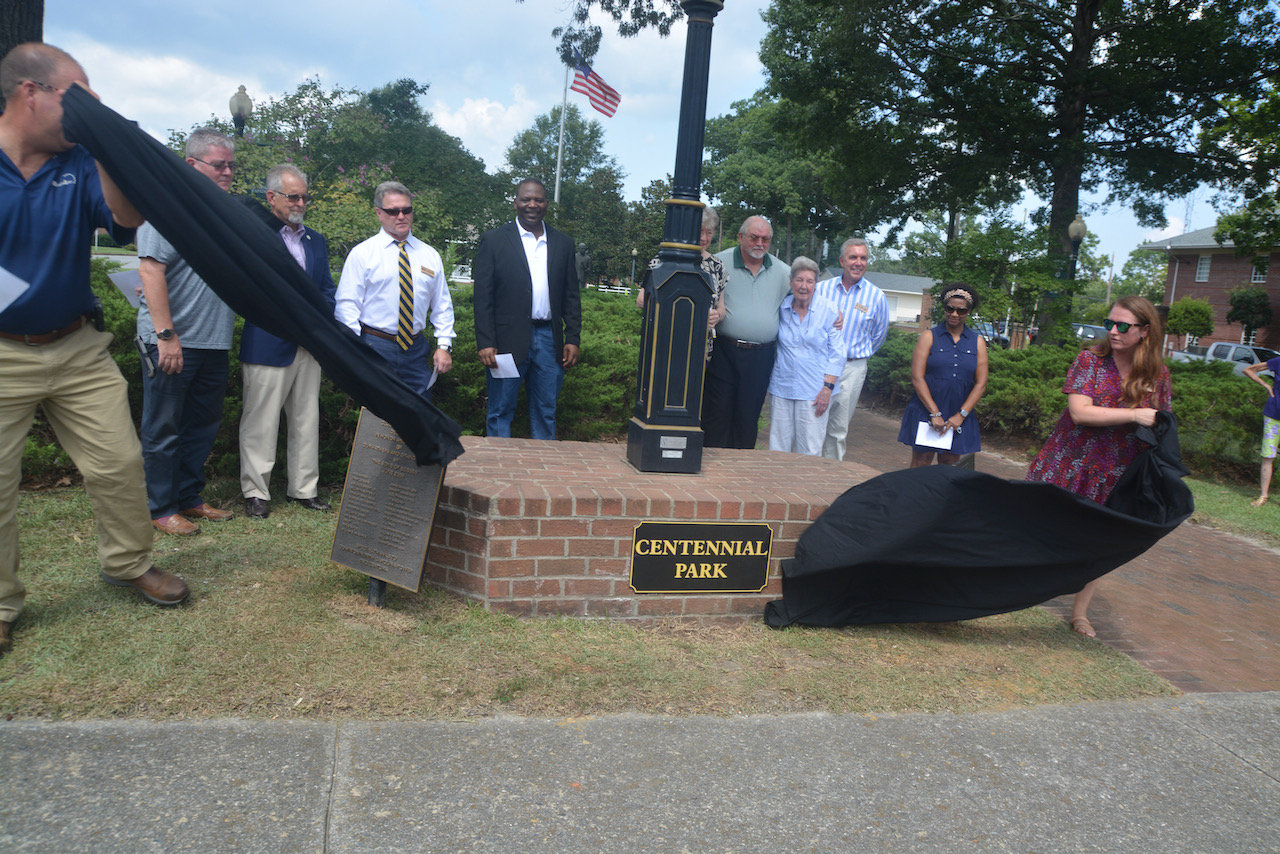 The end result — the raising of $20,000 in private donations to get them back in working order and a new plaque to honor those who contributed to the effort.

Thursday those involved in the fundraising effort gathered at the park off Roanoke Avenue to rededicate the now working clock and listen as it struck noon and the carillon began to play music.

“The clock was really an icon in the park and the avenue,” Mayor Emery Doughtie said. “When it stopped working people called in.”

The same effort which led to the clock’s placement in 2005 in commemoration of the city’s centennial led to getting it working again, the mayor said. “We were able to address the problem and address it without funds from the city.”
One of the names on the new plaque is the Reverend Daniel S. Hux, the father of the mayor’s wife.

Reverend Hux’s name is among 11 on the new plaque along with the words, “Praise God from whom all blessings flow - amen,” which was what one of the donors wanted inscribed on the tableau instead of their name.

Doughtie said the private donations come from the spirit of small communities. “People get involved and you get to know people. You can’t put a value on something like that.”

Edward Williams, Main Street Roanoke Rapids president, spoke about the efforts of the non-profit through the COVID-19 pandemic and programs such as #rrstrong and other virtual events which led to funding to help businesses on the avenue, have a Christmas celebration in the park and contribute to the clock project. “Despite the challenges, Main Street was able to remain steadfast in its mission.”

Interim City Manager Kelly Traynham said repairs to the clock and the new plaque couldn’t have been done without the private donations.

A special thanks is inscribed to Janet Dixon and Phil Hux, who spearheaded the solicitation effort of the private donations. The new plaque also recognizes Main Street and the parks and the parks and recreation department.

Mike Askew, one of the donors, said after the unveiling of the new plaque, “I’m just proud to be able to contribute and get it back in working order. It enhances the area. I like to see what time it is and I like to hear the chimes.”

Phil Hux also expressed pride. “I’m just proud the community came together. This is something that will last a long time.”

Jay Carlisle said he believed it was important for Leonard Hockaday Sr. to be named on the plaque. “It’s a good thing for the city and those whose names are on the plaque.”

Parks and Recreation Director John Simeon said the clock stopped working about a year ago. “The clock has always been an icon and focal point on Roanoke Avenue. To have community members and leaders bring the clock back to its original state speaks volumes for our community and those who donated their time and resources to complete the project.”