City files complaint to keep county from charging for 911 service

The city of Roanoke Rapids has filed a complaint and motion in Halifax County Superior Court which seeks an order the county provide 911 dispatching services for municipal emergency responders at no charge to the city.

City Attorney Geoffrey Davis said this morning, “I don’t like to comment on pending litigation, but I don’t want anyone to think that the city and the county are fighting with one another, or that this is indicative of some broader rift between the two governmental entities."

He said the complaint boils down to "a dispute regarding the law applicable to the 911 Center situation, and it’s come to the point where the city feels it needs a third party to make the decision for us. That’s what the courts and the Declaratory Judgment Act are for, after all.”

As of this report the county had not been served and County Attorney Glynn Rollins had no comment.

In the complaint filed Tuesday Davis said public safety agencies are required to participate in a 911 system per state statutes.

Calls to 911 are initially received by local public safety answering points — referred to as a PSAP. The calls are then sent on to the appropriate responder.

Davis wrote there is no provision under North Carolina law that requires an existing PSAP to contract with PSAP for call processing or dispatching nor is there any provision of state law or the state's administrative code that requires a municipality to remunerate the PSAP for those services.

Since 2013 the state has required mobile phone companies to collect a fee on mobile plans of state residents. In the 2020-21 fiscal year Halifax County received $361,538.

In 2004 the city and county along with other municipalities entered into an agreement to pay the county a certain amount of money every year. The amount was based on a formula based in part on the 911 Center's budget and municipal call volume

The agreement was revised in 2013.

Since the 2015-16 fiscal year the amount Roanoke Rapids pays "pursuant to the amended agreement has increased dramatically," the complaint says. 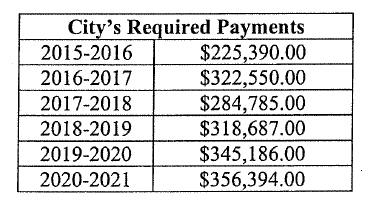 "The amount that the plaintiff pays to (the) defendant pursuant to the amended agreement is significantly more than the amounts paid by other municipalities in Halifax County."

As of June 30 of last year the projected amounts the municipalities would be obligated to pay under the amended agreement in the current fiscal are contained in the graphic below.

On June 29 of last year the city provided its one-year cancellation notice to the county.

Former City Manager Joseph Scherer notified the county, "By direction of the Roanoke Rapids City Council, the city hereby notifies the Halifax County commissioners of the city's intent to withdraw from (the) agreement by issuing this one-year notice of cancellation."

In the complaint Davis said the cancellation notice occurred after multiple discussions between personnel acting on behalf of the city and those with the county. "These discussions resulted in a proposal by the defendant," in which for the current fiscal year the city's payment would have been reduced from $352,497 under the amended agreement to $281,321 under (the) defendant's proposal."

Davis said the county's proposal also included a provision where the city would agree that any future attempt to terminate the proposed agreement would require the city to either make arrangements for another PSAP to perform its dispatching services or make the city's termination subject to a county-wide referendum that would approve a new county tax levy for covering the costs of municipal dispatching.

Tina May, an administrative assistant with the city police department, was tasked with performing a survey of the state's existing PSAPs in an attempt to determine whether they had agreements with their municipalities and what financial contributions, if any, they had received from those local governments.

In her affidavit May said she was asked by the city manager to conduct a survey of the 127 PSAPs in the state. She received responses from 72.

Of those 38 were regional PSAPs which included one or more counties.

According to her survey, 28 were independent municipal PSAPs which did not participate in their respective county's PSAPs.

Only six of the 72 reported receiving funding from participating public safety agencies.

Davis wrote the city has made several attempts to negotiate an alternative resolution to the situation, which have been rejected.

The county's formal rejection of the proposals was sent to the city on February 23. "In this letter (the) defendant's counsel states that should the plaintiff continue to refuse to accept the proposed agreement the defendant will nonetheless 'invoice and expect reimbursement' for the costs related to municipal dispatching."

On April 7 the county manager sent a letter to the city indicating that the county will invoice the city $406,863 for 911 services for the upcoming fiscal year.

"At this point there is an actual controversy between the parties with respect to their rights, obligations and duties under relevant North Carolina law and absent an order of this court, (the) controversy will remain unresolved," Davis wrote.

First cause of action - declaratory judgment

The city contends the following:

Should the city fail to agree to the terms of the county's proposed agreement the county will invoice the city for an amount of costs to be determined by the county and "will likely take steps to recover it."

" ... Litigation between the parties over the costs of municipal dispatching and their obligations under the relevant laws of the state of North Carolina is inevitable and unavoidable."

The "disagreement between the parties as described in this complaint represents an actual, genuine and justiciable controversy between them regarding their respective obligations to one another relative to municipal emergency dispatching."

The county "is not entitled to a defense of sovereign immunity because by attempting to force the plaintiff to pay for municipal dispatching services (the) defendant is acting contrary to statutory authority and unlawfully seeking to tax (the) plaintiff with costs that (the) defendant is required to bear."

The city contends that "it is necessary and proper for this court to determine the rights, obligations and duties of the parties in relation to applicable North Carolina law ..."

"There is a strong likelihood that (the) plaintiff will ultimately prevail on the merits of this matter because the statutory and administrative law cited ... requires the defendant to provide minimal dispatching services to (the) plaintiff at no charge," Davis wrote.

Davis wrote, "(The) plaintiff is entitled to an injunction preventing the defendant from taking action to terminate those services as the direct beneficiary of those services.

"In this action preliminary injunctive relief is necessary to stave off irreparable harm during the pendency of this action."

Finally, Davis requests the court to enter a preliminary injunction which prohibits the county from terminating or otherwise curtailing the county's provision of municipal dispatching services for the city and that the city is not required to pay or reimburse the county for any costs related to the provision of these services. "  …Upon a trial on the merits of this action, the court enter a permanent injunction prohibiting the defendant from terminating or otherwise curtailing the defendant's provision of municipal dispatching services to (the) plaintiff."