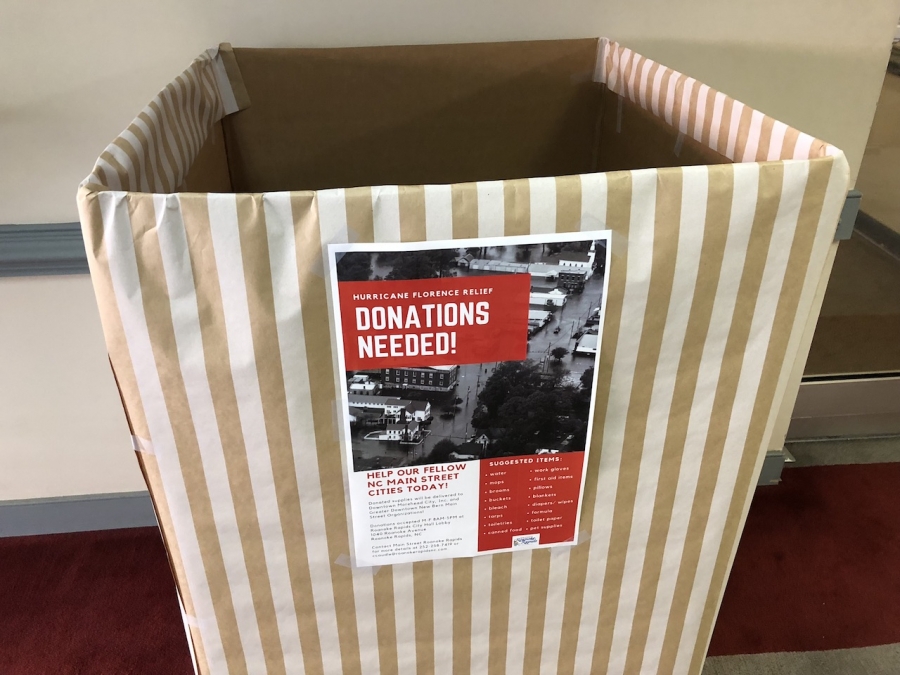 While Roanoke Rapids was spared from the ravages of Hurricane Florence, others weren't.

That's why Main Street Roanoke Rapids is collecting items to send to its fellow Main Street partners in New Bern and Morehead City.

A collection box has been set up in the lobby of city hall at 1040 Roanoke Avenue.

"Roanoke Rapids is one of almost 90 active North Carolina Main Street communities across our beautiful state," said Christina Caudle, the city's main street development director. "We are very fortunate that we did not sustain any damage as a result of Hurricane Florence."

Many communities within the Main Street network were not so lucky, Caudle said. "In fact, 40 percent of the North Carolina Main Street communities have reported damages to their historic downtowns since Florence first hit the coast."

Caudle said this number will continue to rise as many rivers are expected to crest by the end of the week. "Downtown managers, especially located in coastal communities, are reporting major structural damage that will likely result in long term or even permanent small business closings.  Even more tragic are the stories of individuals in their communities that have lost everything – both personally and potentially professionally – as a result of this natural disaster. It will take years for these communities to recover."

The supply drive is being sponsored by the Main Street Roanoke Rapids Board of Directors.

Caudle said of New Bern and Morehead City, "Both cities experienced a tremendous amount of flooding."

There was also a large amount of wind damage, she said.

Caudle said there is a bond between towns and cities in the Main Street program. "We do a lot together. We have forums we use daily and quarterly regional meetings. We have a conference annually and have manager meetings. We're able to see a lot of what they've done. I can't imagine how high their level of stress is."

Caudle said she and the board believe "you should always help your neighbors. We would like to think if we were in the same situation other Main Street partners would help us. It's the least we can do."

In two days alone in New Bern there has been $46.2 million in residential damage and $20.9 million in commercial damage. "It's going to keep climbing," she said.

The attached flyer has a list of items the two cities need the most. "We're going to see what we can come up with. We're going to get the supplies to them as quickly as we can."

There is no specific end date for the supply drive, Caudle said, and the items may be brought to the city hall lobby between 8 a.m. to 5 p.m. Monday through Friday.

For those who can't get to city hall the Zipsy food delivery company will pick up the items free of charge. Zipsy can be reached at 252-578-2249.

"As we all know first-hand, rural areas and communities have limited local resources so every item we collect will be helpful in the coming weeks," she said.