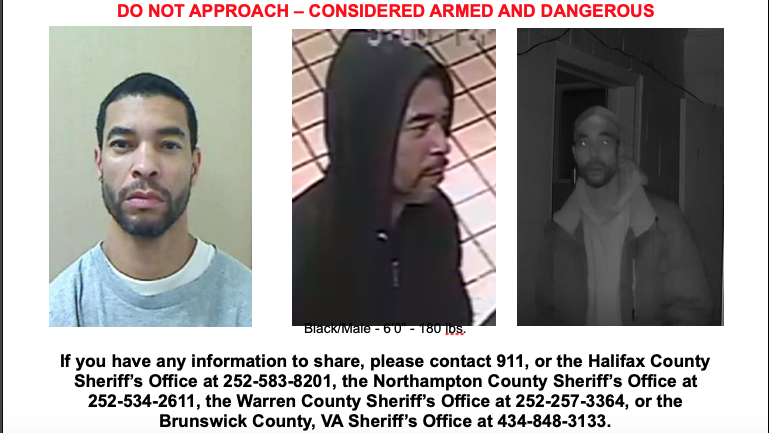 Cul Priest Jones’ flight from law enforcement since last October came to an end early this morning following his capture in an area of Roanoke Rapids traditionally called the Lincoln Heights community.

Once officers were in the area and spotted Jones, the 45-year-old fugitive fled. He was apprehended and transported to Halifax Regional Medical Center. Tripp would only say Jones “was injured by resisting arrest.”

The sheriff said his office has been in touch with the state Department of Public Safety who is in the process of assembling a team to return Jones to state custody. “It is my goal not to house him in the Halifax County Jail because he is an escapee from the department of corrections and that’s where he belongs.”

Jones has been on the lam since his escape from Hoke Correctional Institution on October 14 of last year and is believed to have committed several crimes in Halifax, Northampton and Warren counties as well as Brunswick County, Virginia.

It is believed Jones has committed the crimes of burglary, larceny and motor vehicle theft while on the run.

Said Tripp: “He’s been wreaking havoc in the Roanoke Valley since he escaped in October. It was several days before they (the state) notified anyone he escaped.”

The sheriff said he expects warrants from the counties where Jones committed crimes while a fugitive to be served once he is back in the state system.

Tripp said he was appreciative of the governor’s office establishing a $10,000 reward for the capture of Jones. “It’s sad that it seems the majority of the time people only want to help when there’s money involved.”

Whether anyone is eligible for the reward is undetermined at this time, Tripp said.

The sheriff said he was also appreciative of the $2,500 pledged by Northampton Sheriff Jack Smith, Warren Sheriff Johnnie Williams and Brunswick Sheriff Brian Roberts. Those contributions, along with a pledge of $2,500 from the Halifax County Sheriff’s Office boosted the total reward to $20,000.

Tripp said he was pleased with the capture of Jones. “Cooperation works and we’re proud of the working relationship we have with the Roanoke Rapids Police Department.”

Interim Roanoke Rapids police Chief Bobby Martin said, “It was a coordinated effort between the Halifax County Sheriff’s Office and Roanoke Rapids Police Department. The two agencies working together brought this together without anyone getting hurt.”

The October escape made the second time in his criminal history Jones has fled from prison custody.

The Greensboro News & Record reported in 1995 Jones, who at the time was allegedly responsible for a three-state crime spree while on the run, was taken into custody after being arrested by police in New York.

At the time he fled from Person Correctional Center Jones was sentenced for shooting Warren County Sheriff's Office Detective Harold Seaman in 1990.

His Hoke County escape came after his conviction in 2014 to a term of 7 years and 11 months for first-degree burglary, which was related to a December 2013 crime in which he was shot by a business owner who was awakened by noise and saw Jones behind the cash register with a handgun.