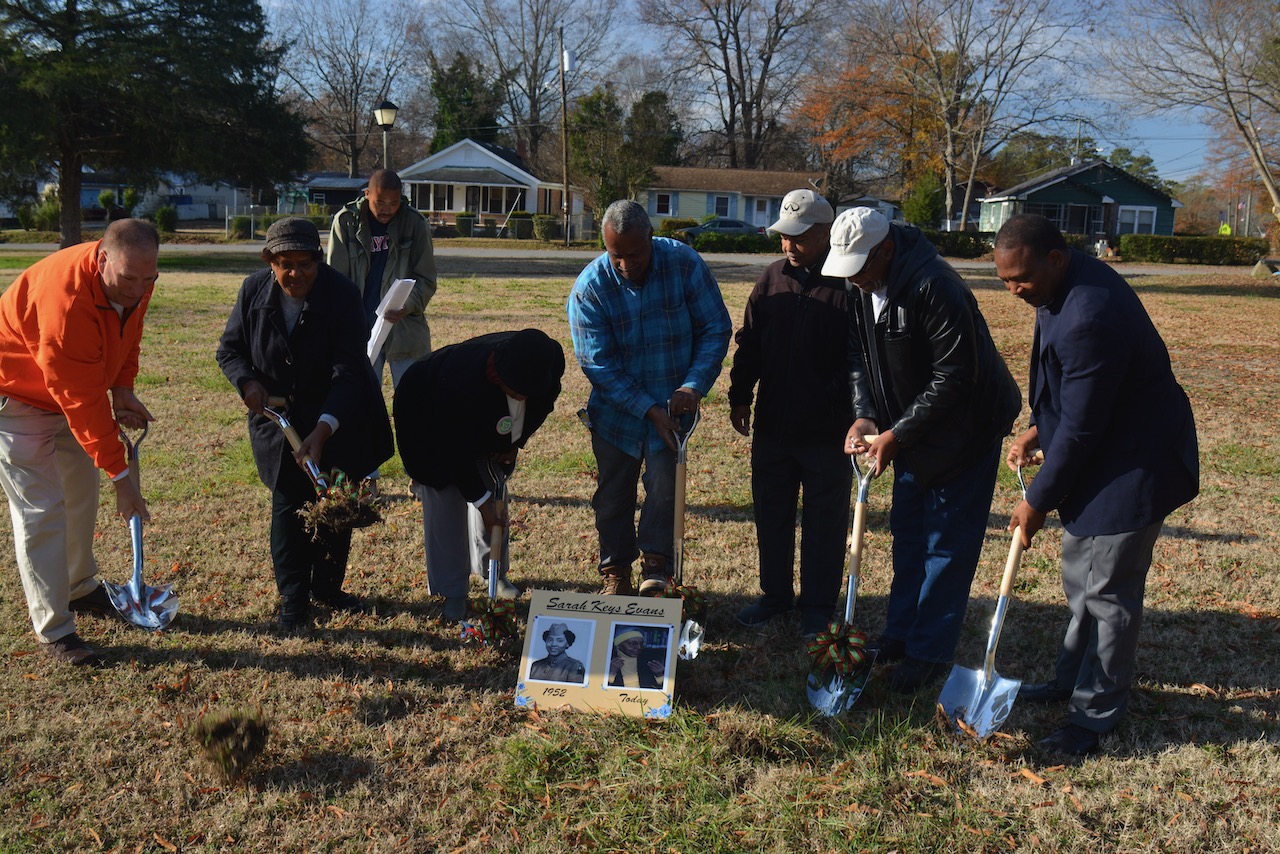 Though the task is somewhat overwhelming at times, I am extremely proud to say that we’ve come this far by faith — ready to break ground to induct into the hall of fame of history a trailblazer whose time has come,” said Reverend Charles McCollum at the park, which is located at Virginia Avenue and Wyche Street.

McCollum said Enfield artist Napolean Hill has completed the mural work for the plaza and chose to entitle it Closing the Circle.

The story of Keys, now Sarah Evans, will be told in eight chronological mural panels and two bronze plaques mounted on two semi-circular walls. “Our hope is that Mrs. Sarah Louise Keys-Evans’ story will not only help transform the Roanoke Valley community where her story took place, but will be made known to millions worldwide for many generations.”

McCollum said the Roanoke Valley Southern Christian Leadership Conference first learned of Keys in 2017 when her name was submitted as an award recipient for taking a stand for justice. She was honored with the Presidential Drum Major for Justice Award. “Sarah’s arrest for refusing to give up her seat prompted the landmark court case Sarah Keys versus Carolina Coach Company in which the Interstate Commerce Commission outlawed the segregation of black passengers in buses traveling across state lines.”

The ruling in the case, which was prompted when Keys refused to give up her seat in Roanoke Rapids, was five days before Rosa Parks took her seat at the front of a bus in Montgomery, Alabama, launching the bus boycott and the Civil Rights Movement.

McCollum said before the start of the ceremony, depending on the weather, the project should be completed in less than a month, but a dedication won’t be held until spring.

Members of the RVSCLC are hopeful Keys will attend the dedication. “Even if she can’t come we can set up something one way or another to have her here,” said Ervin Griffin Sr., referring to a Skype or streaming session of the dedication.

Roanoke Rapids City Councilman Carl Ferebee said before the start of the groundbreaking ceremony, “The committee has done a great job. I appreciate the committee looking to have the project at Martin Luther King Jr. Park for two champions of history.”

McCollum said the plaza will be unique and the only one of its kind honoring Keys in the nation.

Roanoke Rapids Parks and Recreation Director John Simeon said, “It will be a real treasure to have here in Roanoke Rapids. I’ve enjoyed working with all of you.”

Griffin said research has shown Keys credited her father for encouraging her to seek action against the coach company. “If it wasn’t for him, she would have kept going to Washington, North Carolina, and not said a thing.”

David Putney of Putney Construction is doing the work on the plaza. “I thank Reverend McCollum for choosing me. This is something I think highly of.”