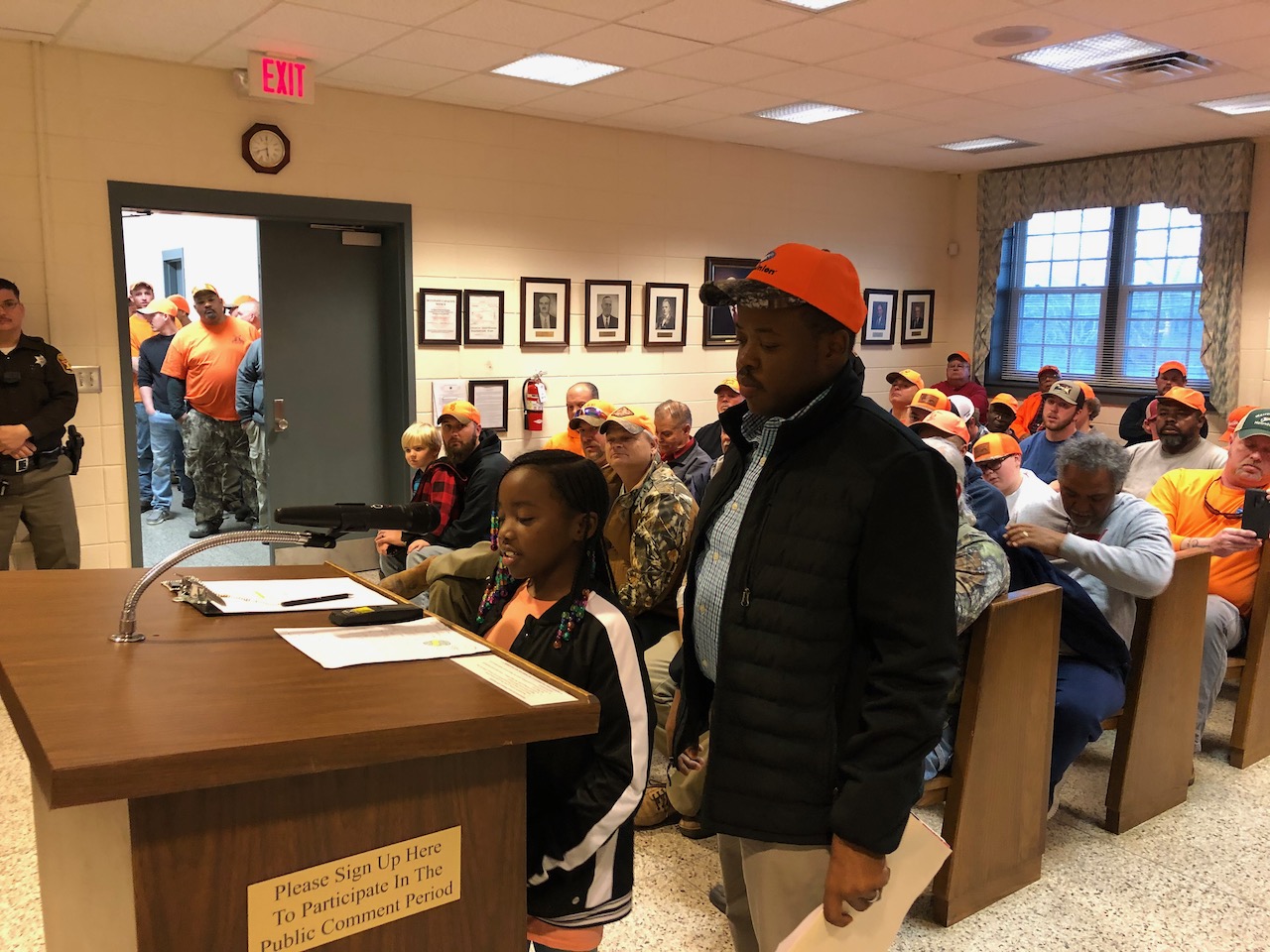 Halifax County commissioners will let state legislators decide on whether to OK proposed hunting regulations which focus on the use of the dogs.

In a portion of the Monday night meeting slated for discussion of other business, commissioners discussed the issue after several hunters spoke to them.

They decided to leave the matter open for legislative consideration unless something new comes to the committee which originally sought out the opinions of hunters and hunting clubs on the issue.

The board had already unanimously approved sending the proposal to its state legislative delegation after a January 21 vote on the matter. State lawmakers go back into session in the latter part of April.

The boardroom was filled to capacity with the overwhelming majority of hunters wearing blaze orange hats. So many attended the meeting in the Historic Courthouse on King Street that sheriff’s office deputies and the county fire marshal had to relegate those who did not have a seat to stand in the hallway.

At the request of Commissioner Patrick Qualls, who chaired a committee on the matter, the board amended its policy of no public comment period on the second meeting of the month to allow the hunters, many of them associated with area hunting clubs, to speak.

Joel Scott, with his young daughter, came up to speak and Scott yielded to his daughter.

She spoke from a  piece of decorated paper.

She told commissioners the laws should stay as they are. “My dad is very busy at work so when he does get a chance to hunt he likes to do it the way he has been doing it. If you change the law it will be hard for fellow hunters to hunt the way they like. Plus, that means less deer jerky and I love deer jerky.”

Scott told the board, “Recently a resolution was issued that has the potential to affect mine and countless others’ ability to enjoy the age-old practice of hunting with hounds.”

Scott said the proposal is structured “in a way that limits landowners’ rights and would add unenforceable regulations to law enforcement that is already overworked, often unappreciated and undercompensated.”

He said the proposed legislation addresses laws already in place. “ … The Landowner Protection Act already provides a simple method for property owners to post their land and keep unwanted guests off their property. There is no need to require written permission for every tract of land.”

The minimum acreage requirements in the proposal “further limit property owners, their families, friends, and lessees from enjoying their property as they choose,” Scott told commissioners.

He said out of roughly 40 counties which allow deer hunting with dogs, Halifax would be the only county with such regulations. “Restricted months for training further infringes on legal and ethical hunters’ privilege to enjoy the great outdoors.”

The North Carolina Wildlife Resources Commission constantly monitors wildlife and has seen no need to enforce such restrictions. “I don’t see why or how Halifax County should. In short, there’s nothing in the proposed regulations that would stop the few issues that have been expressed to the board. What does happen with these new regulations is that small, family-oriented clubs will no longer be able to hunt as they have for generations and law-abiding hunters will be further restricted in their method to enjoy the great outdoors.”

Scott requested the board take a second look at the proposal and appoint a more inclusive committee to review and come up with a solution to the concerns expressed. “Responsible hunting clubs and the newly formed Halifax County Houndsman Association are eager to work with the board to come up with a solution and to help mediate concerns between hunters and landowners.”

Sammy Shearin told the board the way proposal is written he would have to carry some 40 to 50 permission slips in his pocket while hunting with dogs.

He asked the board to withdraw the proposal and said if legislators approve the ordinance, there will be an increase in deer population as well as more car crashes involving deer.

Lydia King said her husband has used dogs to hunt for 60 years and has $10,000 in GPS collars. “He can tell where every dog he’s let out is.”

People from Wake County will spend $30,000 a year leasing land. “Y’all have done a disservice to the people who hunt with dogs in this county,” she said.

James Heath of the Eastern Carolina Houndsman Alliance said it is the renegades who cause the trouble, yet boards “don’t want to place the blame on the outlaws — you want to place it at my feet.”

Hurley Richardson Jr. said he belongs to a 75-member club who not only love hunting, but enjoy serving the community through charitable events.