Mrs. Thompson was born in Northampton County, NC, the daughter of the late Benjamin Thomas and Pearlie Davis Jones. She was formally employed with Roanoke Rapids Hospital and J. P. Stevens & Co.

Graveside services will be held at Crestview Memorial Cemetery, Wednesday, November 5, 2018, at 2:00 PM, with Rev. Randy Martin, officiating. The family will receive following the service.

Online condolences may be sent to the family at: wrennclarkehagan.com 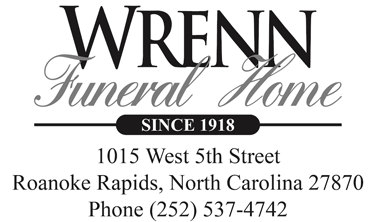