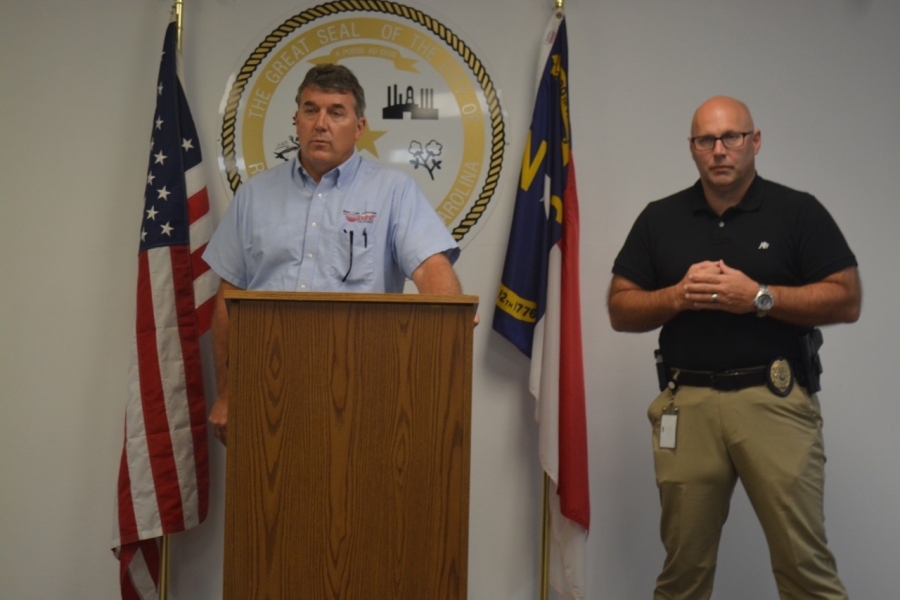 As a store employee shot in an armed robbery has been released and continues to recover, her employer today offered a $10,000 reward for information which leads to the arrests and convictions of those involved.

Scott Aman, president of New Dixie Oil Company, where three robberies have occurred in Roanoke Rapids over the last week, announced the reward at a joint press conference with Roanoke Rapids and Weldon police.

Asked about the employee who, according to the police report was shot once in the torso at the New Dixie store commonly referred to as Presto last week, Aman said, "I think a word in summary would be resolve. She has been released. With all that she's been through I use the word she is doing well. She has a long way to go but her resolve, her attitude, her strong will is encouraging and should be an encouragement to us all."

Said Aman: "She certainly needs our prayers (as well as) others that were assaulted in other stores, customers that were impacted. You're supposed to just go to work, do your job. There's a lot of people working to fix that."

In a statement handed out before the press conference Aman said, "As I was leaving her from a hospital visit, she stated that she was ready to get out, get well and get back to work. May her strong will and positive attitude be an encouragement to us all."

Aman said in the statement all law enforcement is working "extra hard, extra long and together in harmony with all hands on deck to bring an end to these robberies, this evil."

Last week there was a joint meeting with managers, employees, law enforcement and local pastors "to pray, review safety efforts, review best practices and share further ideas so we may coordinate all efforts. My leadership team and I have also been meeting and talking with managers, individual employees, store teams and others impacted by this evil. We are making every effort to listen and learn as we try to address concerns and offer support. Our employees know that counseling has been extended to them as they want or need."

Opening the briefing, Hasty said law enforcement believes the three Roanoke Rapids robberies and one in Weldon are related. "Investigators have been working to follow up on leads in each of these cases and are continuing to do so right now. We have determined at this point that all three are connected by the way they entered the business, the actions they took while they were inside the business, physical descriptions of the suspects and other details we cannot release at this time that could affect the integrity of the ongoing investigation. We also feel the suspects of the September 17 … robbery of the Family Dollar in Weldon are connected to the robberies in Roanoke Rapids."

In announcing the reward, Hasty said, "We have been working closely with the leadership of New Dixie to solve these crimes. They have been helpful providing information helpful to us to continue this investigation. We have put things in place at New Dixie and New Dixie is also working on things to keep their employees and customers safe."

Weldon police Chief Chris Davis said, "We do believe that our Family Dollar robbery … is related to the same suspects as their robberies. We are also working hard, have investigators working hard, diligently trying to identify the suspects and we're also working with the Roanoke Rapids investigators in an attempt with both departments to help solve this crime, putting all our resources into trying to locate these individuals as quickly as possible."

Hasty said both departments are continuing to investigate the mode of travel the suspects have used to get away from the crime scenes.

The Halifax County Sheriff's Office is assisting the departments in the investigations.

Roanoke Rapids police Captain Bobby Martin said the police department has talked about best practices with New Dixie employees including cooperating with robbers, trying to remain calm, telling they can't or don't have access to safes and attempting to activate the alarm as safely as possible.

"We tell them expect to be threatened," Martin said. "We know the individuals doing these robberies have become violent. We know the threats are there. They've shown they will actually follow through with some of the threats by one of the employees being shot."

The officers hope the offer of the New Dixie reward, as well one of up to $1,000 from Crimestoppers will help investigators solve the cases.

"The new catchphrase is if you see something say something, if you know something make a call to us." Hasty said. "Crimestoppers is anonymous. They want your information, not your name. Hopefully, with this reward, what New Dixie is offering now it'll encourage somebody to step forward and give us more information to bring this to a close."

Said Martin: "We just want the community to understand we're looking for safe environments and if they've seen something and they have the information we want to be able to use the word harmony and that's what we want to live in here, all together in harmony. With Mr. Aman stepping up, I hope the public understands if they know something they can have a way of letting us know so they can get the information and hopefully get an ending to this."

Hasty said after the briefing that once the individuals are caught law enforcement will look at qualifiers to pursue federal indictments against the suspects.

Around 1:30 a.m. at New Dixie on Julian R. Allsbrook Highway near Cracker Barrel.

One customer outside the store was pistol-whipped and robbed of their cellphone and wallet.

The store was robbed of an undisclosed amount of money and the clerk was assaulted.

A customer inside the store was robbed of their wallet.

When officers arrived employees told them a person entered the store armed with a handgun and demanded money as well as the purse of a customer who was in the business.

Both the clerk and customer complied with demands of the suspect.

The robbery occurred at New Dixie Mart in the 100 block of Julian R. Allsbrook Highway around 12:45 a.m. The store is traditionally known as Presto.

One of the suspects struck the employee in the head with a handgun. The suspects proceeded to take money and cigarettes.

When the suspects were exiting the store, one returned back to the counter and shot the employee who had initially been struck in the head with the weapon.

Armed robbery at Family Dollar in the 200 block of East Second Street.

The robbery, in which an undisclosed amount of money was taken, occurred shortly before 8:30 p.m.

Both suspects had handguns.