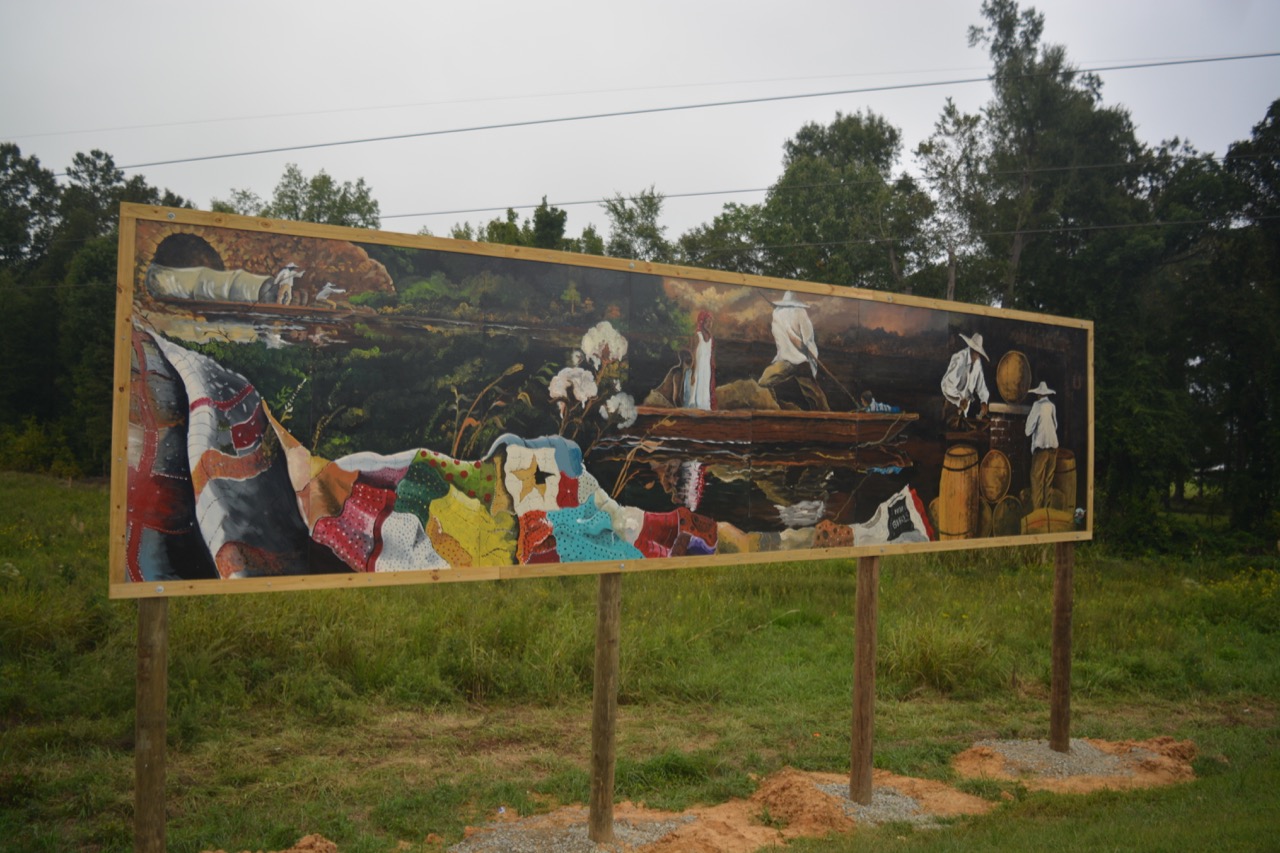 The latest mural by Napoleon Hill rates as one of his favorites and continues telling the saga of Roanoke Canal boatmen and their ties to the Underground Railroad.

Within the painting, which can be seen at the Roanoke Canal Museum on Jackson Street Extension, are three stories — boatmen carrying goods through the aqueduct to Virginia, a boatman carrying a father and his two children to freedom and two men making barrels which were used to store the merchandise.

There is a quilt with the National Underground Railroad Network to Freedom logo included as a patch. Then there’s the Bible.

Overall, Hill said, “The quilt represents the mother who holds the whole family together.”

The Bible, he said, “It is the center point of our lives. It represents strength and wisdom and the word of God.”

The dedication of the mural will be held October 8 at 5:30 p.m., said Ryan Newsome, cultural resources leader of the museum.

“Everything tells a story,” Newsome said earlier this week. “The canal being used in the Underground Railroad, the aqueduct, the barrel makers.”

The mural has already caught the attention of motorists coming down Roanoke Avenue and Jackson Street Extension. “People stop and take pictures. I hope it translates to people asking questions.”

Roanoke Rapids Parks and Recreation Director John Simeon said, “This is a great group effort between the Canal Commission, Halifax County Arts Council, Friends of the Canal and the Halifax Convention and Visitors Bureau that represents a great piece of history in our community.”

Said Simeon: “I applaud Ryan for his efforts in seeing this to fruition and for his skills in setting the framing to the mural. Talented employees like Ryan create opportunities for our community to benefit from projects such as this.”

The project started with the arts council, Newsome said. The arts council commissioned Hill to do the mural from grant funds and then donated it to the Canal Museum.

“It’s a part of our deep history here in the Roanoke Valley that helps educate people on what life was like back in this time,” Simeon said.

Paired with a recent donation of two photographs of boatmen who navigated the canal, Simeon said, “helps tie the history together and allows people to have a sense of what life was like during those times. When you have photos and the mural, it’s much easier for people to get the feeling of what life was like. A picture is worth a thousand words.”

Newsome said instrumental in placing the mural was Tommy Daughtry of Dominion Power, which donated and set the poles supporting the artwork.

For Hill, the story the mural tells, “It’s very important. It all ties together the history.”