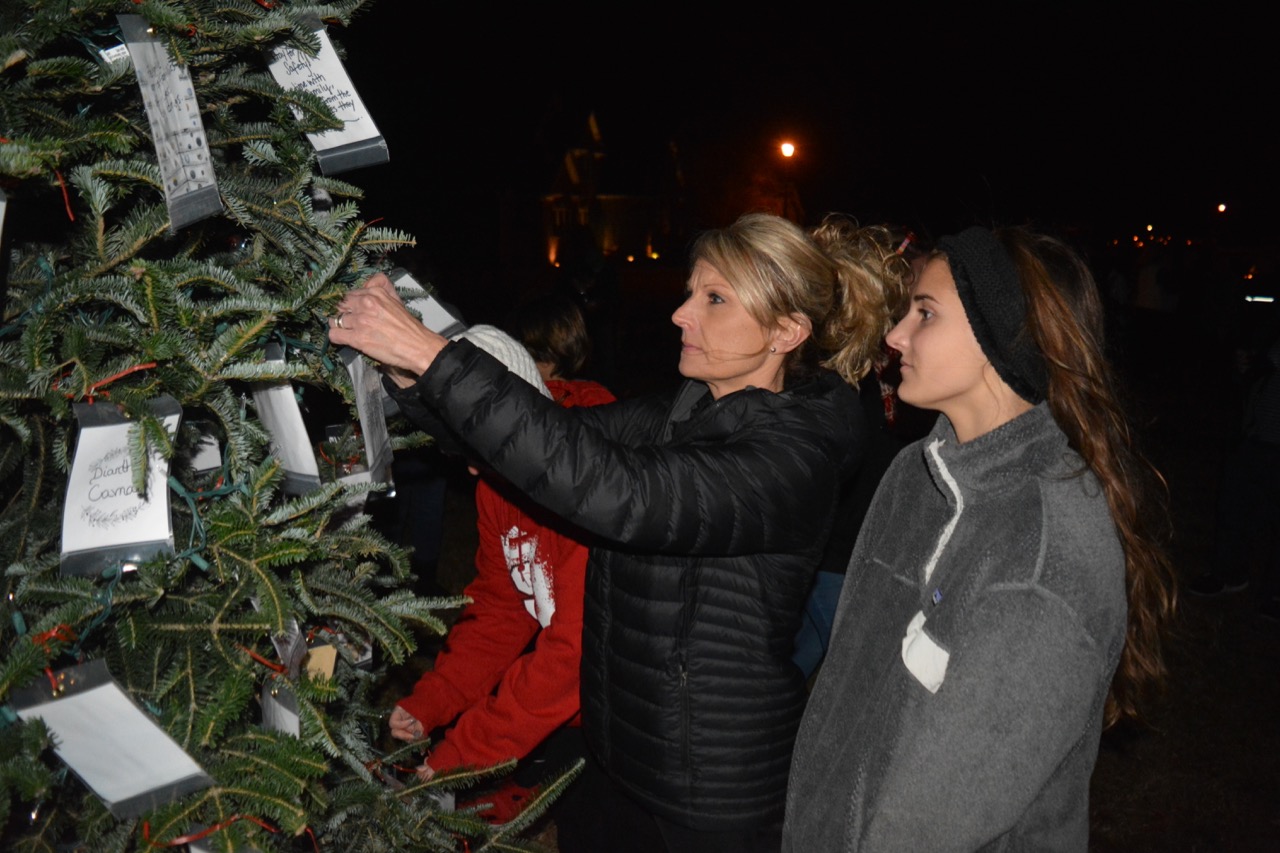 A tree of prayer invites all to come togetherFeatured

While still carrying the weight of loss following their son’s death last month, Thomas and Jodie Barrett have opened their yard so others can hang prayer requests on a tree.

Monday night, scores of people came to the Barrett’s home to decorate the Community Prayer Tree with prayer cards and watch as its lights were turned on.

Jodie expects from the turnout Monday the tree will be laden with cards as each Monday through Christmas Eve different church groups will aid visitors by helping them with cards and praying with them from 7 p.m. to 8 p.m.

The Monday schedule is as follows:

December 3 members of First Christian Church will be at the tree.

December 10 members of Valley Community Church and Rosemary Baptist will be at the tree.

December 17 members of First Baptist Church will be at the tree.

December 24 Barrett’s Faithfully Following Ministries and members of New Testament Christian Church will be at the tree.

Throughout the weekday, visitors to the Barrett’s yard at Canal Walk and Old Farm Road will find a mailbox with cards beside the tree to write and hang their prayer requests.

She hasn’t counted the number of cards placed on the tree Monday but she wants it to be full. “We can overlay it. We don’t have to worry about that. There’s just so many in need of prayer and so many that see the value of it. That’s what we want. We want it to be filled. It cannot be too full.”

The idea of the Community Prayer Tree came before Jodie’s 22-year-old son Ryan and two other linemen were killed by an alleged drunken driver as they worked to restore power in the Florida Panhandle in the aftermath of Hurricane Michael.

“The Community Prayer Tree was always a vision,” she said as people filled out cards and hung them before the lighting ceremony. “It’s most important we pray for one another.”

The idea came to her as she spent a year alone while her husband was deployed to Qatar through the Army reserve in May of 2016. “It was just a time when the house was empty. I put up the tree and remembered I wasn’t alone,” she said.

The idea of the community tree, she said, “This was God taking it to the next step so people can experience it during a season when many tend to be lonely and are going through depression.”

While the tree outside gives the Barrett family “strength to know other people are there to love and support us,” Jodie said, “It also reminds us there are other people walking through the same experiences and some different with the same emotion. The focus is not really us but it’s about everyone coming together.”

Jodie said she wants to see the tree become an annual community event.

The attendance Monday touched her heart. “We were blessed to see others come together and support each other. There was laughter and tears and we wanted to be there around the tree with both.”

Her positive outlook in the face of she and her husband’s heartbreaking loss is attributable to her faith. “What people think is my strength is not mine but the Lord’s. His word says when we are weak he is strong.”

The tree is something she explores in her self-published book — Jingle and Joy: Praying Beneath the Tree.

While it was written before her son’s death, there was time to dedicate it to his memory. “The book explains how the reader can have a prayer tree and walks them through 25 days of praying for other people.”

Jodie will be at Drugco Express on Tenth Street and Park Avenue from 5 p.m. to 7 p.m. Thursday to sign copies of her book.

Meanwhile, Johnny Evans is planning a golf tournament in the spring which is to benefit a scholarship in Ryan’s honor.

He played golf with Ryan but the connection was closer. “He was like my son.”

Evans wasn’t surprised by Monday’s turnout. “I didn’t expect anything less. It’s an honor being here.”

Jodie told those who came for the tree-lighting, “I can’t tell you what it means to us.”

The tree, she said, “Is not just for our family. It’s for our community.”

Vernon Bryant, a Halifax County commissioner and his wife, Sandra, came to the event. “It’s really a showing of love in this community,” Commissioner Bryant said. “It shows camaraderie and how well-respected the Barrett family is. For Ryan, it was a life that was well-lived but cut short.”

Thomas said, “The awesome thing is the community came together for us. What we’re doing here is helping each other.”