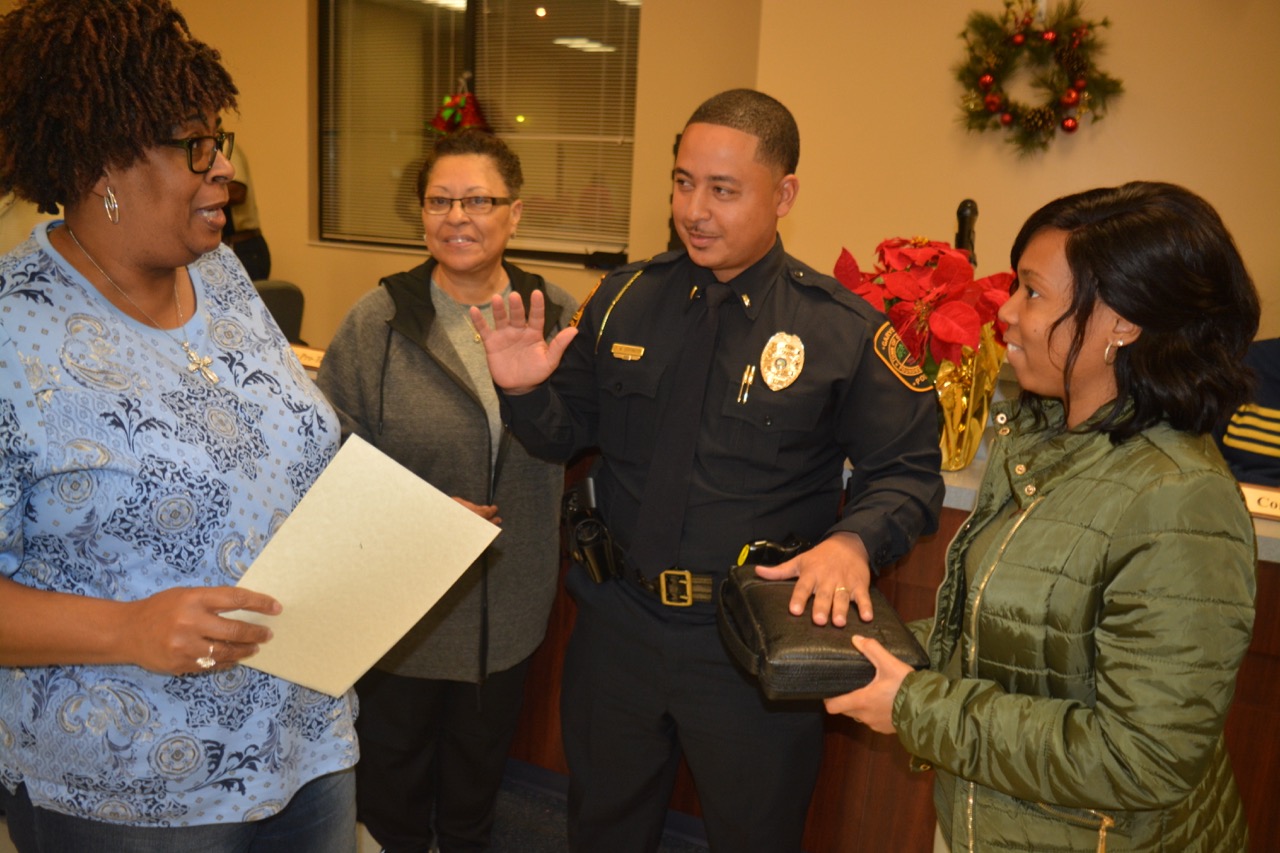 Marcel Goffington suspected he would be named interim chief of the Garysburg Police Department.

He had no idea he would be named chief at Thursday night’s town board meeting.

Goffington, who held the rank of lieutenant within the department, was unanimously voted in as chief to replace Melvin Garner, who begins a new job at KIPP Gaston College Preparatory School as its lead school resource officer on Monday.

“I had a strong belief I would be interim,” Goffington said. “I had no idea I would be promoted to chief.”

When Goffington started at the police department four years ago, he said, “I wanted to sit in the seat Chief Garner sat in. He’s been a great mentor.”

His mother, Brenda Burnette, is a retired law enforcement officer, inspired him as well. “My mom’s been a great influence. She taught me a love of law enforcement and to care about what you’re doing and giving your all. She gave me a great push.”

Goffington started in Garysburg four years ago after a five-year stint with the Northampton County Sheriff’s Office.”

The time with the sheriff’s office was a great experience for him, he said.

His tenure in Garysburg has also shaped him. “It’s a great community. The respect for law enforcement has changed the perspective.”

In making the announcement of Garner’s resignation, town police Commissioner Iris Williams told the board and audience, “It is with sadness I have to accept the resignation of Chief Melvin Garner.”

Williams said, however, after careful consideration, talks with other officers and town employees, it was a good feeling to know “we have a qualified officer ready to step up to the plate.”

She announced while he was to initially be the interim chief, Goffington would be named chief.

Mayor Roy Bell said at a reception before the meeting Garner has done “a wonderful, wonderful job” as chief.

The mayor said Garner was the epitome of professionalism and recalled a person who received a speeding ticket from the chief telling him how respectful they were treated. “This guy was just professional. He treated people like they deserved to be treated.”

He expects the same performance from Goffington. “He has the same type of professionalism. I think the town is going to be in good shape.”

Garner was named chief in June of 2014 to replace Raymond Vaughan after his retirement.

“It’s very hard,” Garner said before the meeting. “My best memories are the people I had to work with. I remember how competent they were.”

Garner said he appreciates the support of the town board, employees and former Chief Vaughan. “I’m going to miss them tremendously. It’s the friendships I’m going to miss.”

Of Goffington, Garner said, “He comes from a good family. He’s definitely going to be a good fit.”