A master trooper with a master plan Featured 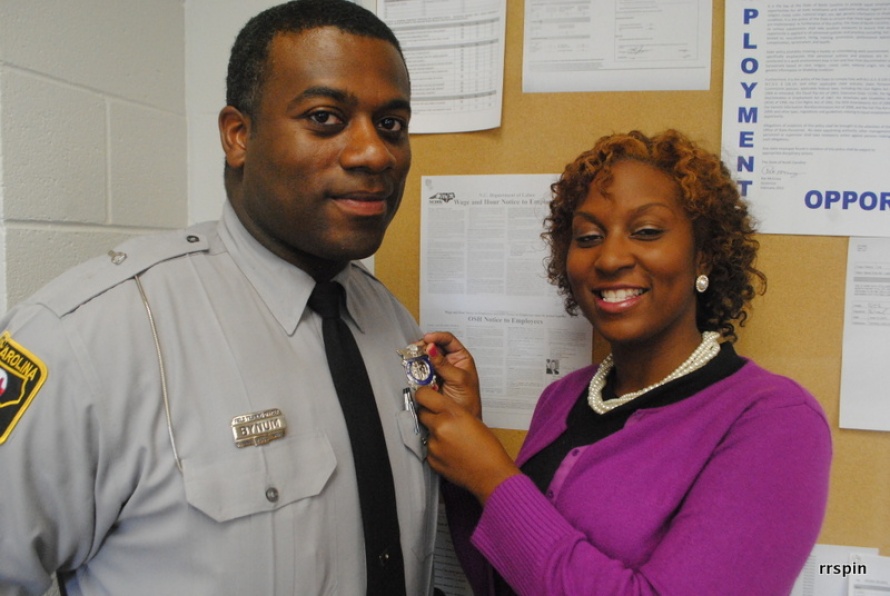 Bynum with his wife Ebony.

For Levern Bynum, it's not so much about a new rank as much as it is about how the rank can help him continue to fulfill a mission of community service.

The Weldon native and North Carolina State Highway Patrol trooper celebrated a milestone Thursday— earning his master trooper badge, which represents six years on the road and a clean record with no disciplinary actions.

It is a badge routinely given to troopers, but Bynum sees it as a key to unlock more doors within the organization and the community.

One of those goals is to work his way to the rank of sergeant. He still has two more years before he can apply. “I'm trying to do right in my job as a trooper. I'm trying to do the right things, getting more involved with the community as well as letting the community know this is a human service thing. It's not all about issuing citations. It's about saving lives and giving knowledge to the community.”

Growing up in the Weldon projects at Spruce Court, the 32-year-old Bynum understands hard work and discipline. “That's one of the main things. Adversity is something serious in life. Making a life decision is hard. You've got to make a plan and stick with it.”

Bynum sees the road he's taken as a positive. “I can relate to all sides of society. It helps me to see what people from all walks of life are faced with. We're all faced with similar issues. It makes me a well-rounded person.”

He graduated Weldon High School in 2001, receiving a scholarship to play football at Winston-Salem State University as a linebacker.

There he was named an all-conference player in the CIAA and in his senior year was the Rams defensive MVP. He earned a therapeutic recreation degree with a minor in psychology.

His high school athletic career was just as stellar and he gives credit to God and several people for helping him seek a positive path.

There was Phyllis Neville, one of his high school teachers. “She was my school mom.”

There was the family of St. Peter's Missionary Baptist Church.

“It kept my mind occupied,” Bynum said. “I sang in the chorus, doing plays for the church, the community involvement helped me do what I liked to do — human service. It gave me things to look for. I wanted to follow the teachings of the Bible.”

There is his family, his sister, his brother and his mother, Wanda Bynum. “She pushed me to work hard. That's my Bobby Knight.”

One of his high school coaches, James Lynch, was a positive influence on him. “My coach was one of the people who guided me.”

Lynch always told him, “Coming up, you've got to look at not being in high school. You've got to look toward to the future. Basically too many times the adolescents I deal with look at the here and now. The character you bring to the table today is how people will see you. I constantly tell people to listen, your perception is going to precede you. Look and watch how you carry yourself. Your tattoos around your neck and face. You have to think about your future. You've got to grow old one day. You can't always be six-feet tall and bullet-proof.”

Simply put, he said, just because you were born and lived in a certain location doesn't mean the location has to define who you are.

Bynum had originally thought of pursuing a career in the FBI when he and his middle school sweetheart, now his wife, Ebony, had a son his senior year in college. “I was doing real well. I came home to a little boy and began thinking about the future of my son. I had to find a job and take my mind off the NFL combines. I thought of ways to get a good, decent job.”

A career in the FBI would most likely mean transfers. He took a job with Life Incorporated for three years working with mentally challenged children. “I had my son full-time while she (Ebony) was in college.”

Still, although he rose to the rank of supervisor with Life, he felt the calling of the Highway Patrol. “The best thing to do was to go with one of the most elite agencies. I built my family in Roanoke Rapids and just didn't want to go with a federal agency.”

He applied to the Highway Patrol and was accepted to its academy on the first try.

Upon completion he was assigned to Pasquotank County where he worked for two years. On his second request for a transfer, he came back home.

He loves working in his home county. “The guys know I'm hard but fair. This is a family county. There is no day I don't want to come to work. It's a great opportunity. I really have no regrets, to be around family and friends and meet new people like Vernon Bryant, the chief of police in Weldon, the sheriffs. They treat you like a family atmosphere. It matriculates to the community.”

He has been a recruiter within the Highway Patrol, which has helped him steer young people toward a positive path. “Working at home you've got to carry yourself a certain way. I tell them to stick to their guns. Don't be a follower, be a leader.”

Part of his duties also include going into schools and churches where he does safety presentations.

Ebony says her husband is the same man he was when they met at 13. “I'm so excited for this day,” she said. “He's always been kind and loving and would give you the shirt off his back.”

Bynum, who is now a father of two children with his wife, says he views his mission in life as that of the old man in the poem The Bridge Builder. “The old man builds the bridge so the young can pass easier. If we're going to make our community better we have to help everybody.”

Sergeant J.C. Goins III said Bynum is an inspiration to other troopers. “I wish we had a whole bunch like him. He's smiling all the time. He never has a bad word to say about anybody.”

He also happens to lead the district in impaired driving arrests and the ones he arrests, the sergeant says, “Thank him for it.”

More in this category: « Prince St. fire under investigation RRPD blotter: June 30-July 2 »
back to top