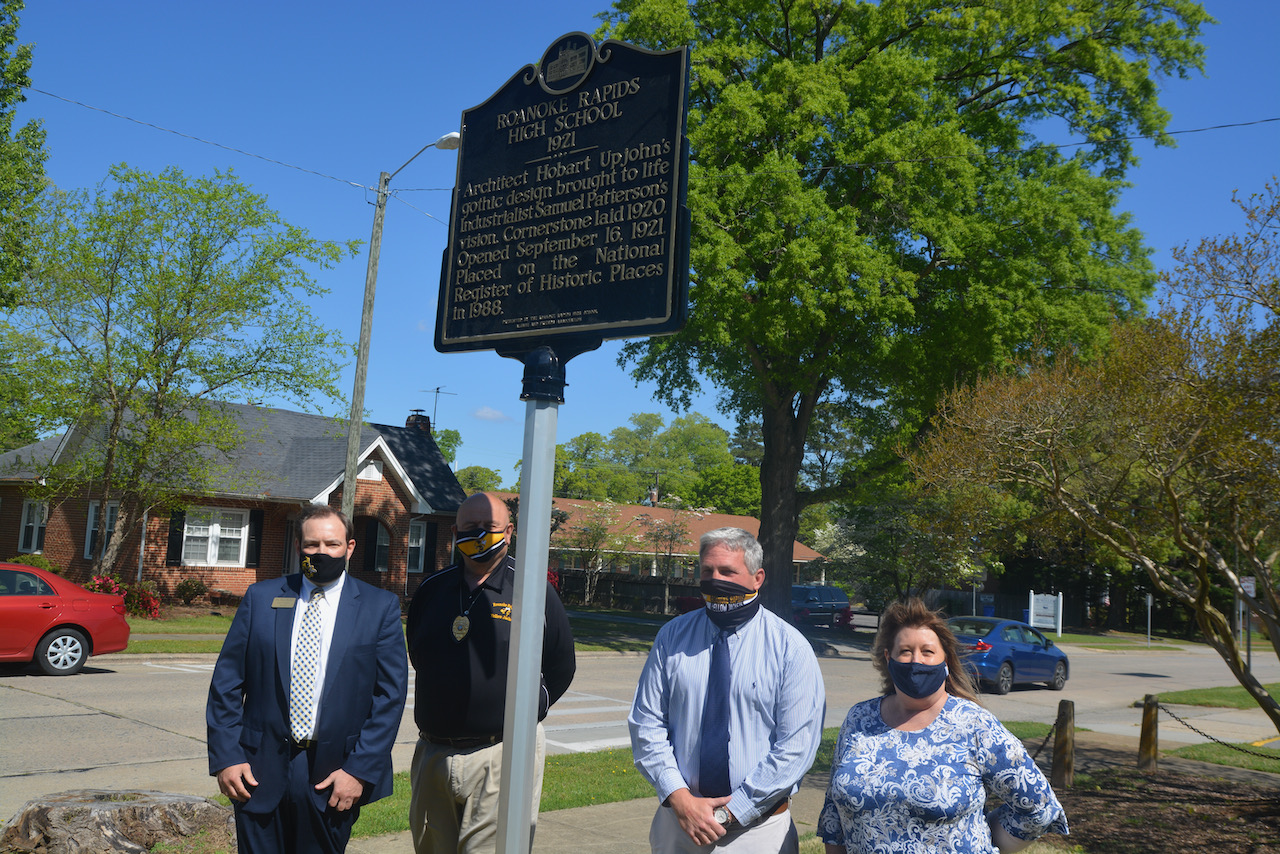 As Roanoke Rapids High School prepares for its 100th anniversary in September, today a sign sponsored by its alumni and friends association was placed at the front of the historic building.

It is a sign which honors the architect behind the gothic building — Hobart Upjohn — and the vision of industrialist Sam Patterson and his desire to bring a new school building to the city.

The lions perched atop the building symbolize power and stability, school resource officer Rex Stainback said today as central office and school staff looked at the sign which was placed by the Roanoke Rapids Public Works Department.

Four owls etched into the front of the building represent wisdom. “It was Sam Patterson’s idea to have a building that represented education, strength and wisdom,” Stainback said.

“This is a proud moment for the school district and the city,” Superintendent Dain Butler said. “We all should be proud. It makes me proud to be superintendent. We’re all thankful to the alumni association for providing this for our district.”

In the gallery: The sign and photos of some of the many examples of memorabilia from the school's history

The school building received its National Register of Historic Places designation in 1988.

The 100-year reunion is planned the weekend of September 24 and 25, school system spokesman Les Atkins said.

The COVID-19 pandemic will play a factor in how the commemorations will play out, said Cindy Garris Boone, RRHS administrative assistant and a member of the alumni and friends association.

Ideally, she said, the school would like to replicate the 1921 opening in which the city was still struggling with the 1919 influenza pandemic.

The school has the itinerary from the original ceremony down to the songs which were played by the band and sung by the chorus. “That’s what we want to do,” Boone said. “It depends on what COVID allows.”

The school system is also considering opening the cornerstone which contains a copper time capsule which was left by Upjohn and contains memorabilia from the era, including a copper coin, Stainback said.

Principal Jeff White was pleased with the new sign. “It’s another way to be proud of this school.”